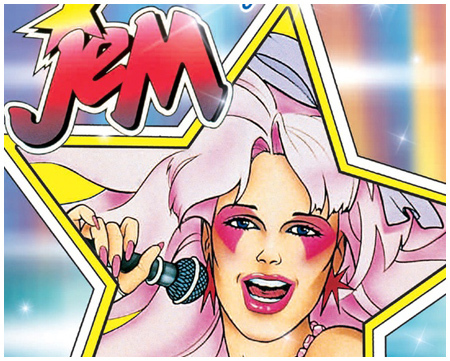 This is truly outrageous. And not in a good way.

My favourite cartoon as a kid was Jem and the Holograms.

If you were an 80s child you may have seen it. If you did, you’ll remember the theme song:

It was one of the few cartoons with a mostly female, and strong female, cast that I remember.

The series revolved around pop star Jem (real name Jerrica Benton) and her band the Holograms.

Jem also owned a company called Starlight Music and a holographic computer called Synergy… it was just so… cool.

So, when I heard that it was being made into a movie, I was excited to say the least. I was particularly happy about the prospect of being able to share something I loved from my own childhood with my kids.

Until I found out the creator of the series won’t be involved in the making of the movie. At all.

In a Facebook post, Jem creator Christy Marx said she didn’t even know about the big-screen plans until a few days before they were officially announced.

“Many people wonder how I feel about it. I don’t think I can hide that I’m deeply unhappy about being shut out of the project. That no one in the entertainment arm of Hasbro wanted to talk to me, have me write for it, or at the very least consult on it. I wouldn’t be human if that failed to bother me.

How is that even allowed?

I don’t know that a quote from myself in Marx’s shoes would’ve been so dignified.

As I say. Outrageous. Truly outrageous.