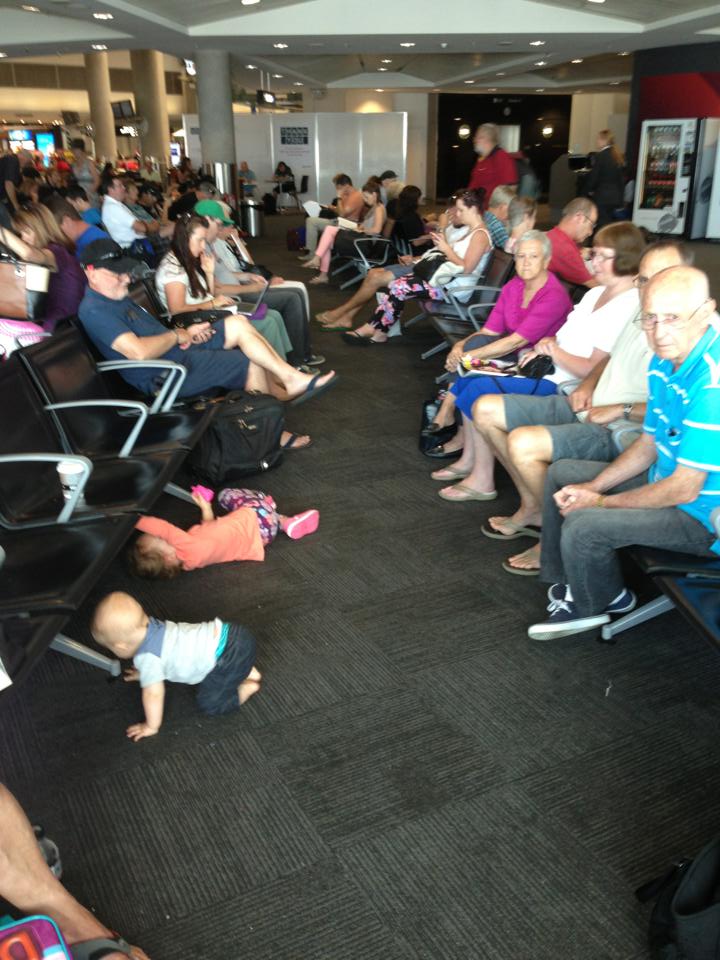 The first was shortly after her third birthday.

I tried not to make a fuss and simply ‘tsked tsked’ while skipping around the trampoline.

But today, I felt I had to quash the potty mouth lest it become a habit.

“There are a few naughty words in the world that you just shouldn’t say.”

“But Dadda says it sometimes.”

“That’s not the point, Libby. The point is, it’s a very naughty word and I don’t want you to say it. It… it… it’s a word that can upset people. If you say it, you can get in trouble… like from your teachers… or old people in the supermarket… or the police.”

We recently returned from a family holiday to Perth – here are my kids waiting in the airport. I didn’t realise at the time, but Libby is quietly picking used chewing gum off the bottom of the chair.

Jonah is collecting and eating random floor crumbs. (OK, I’m stopping him before they get to his mouth).

Until I saw the gum twisted around Libby’s fingers, I actually didn’t care that my spawn were rolling around on the ground in the airport lounge.

Then, I caught some of our fellow passengers giving me the glare, and, as usual, I started to doubt myself.

Perhaps I should’ve insisted on my baby and pre-schooler sitting still… even though they were about to be confined to tiny chairs for five hours on the flight home.

You see, I often worry about being too easy on the kids.

I don’t mind if Libby gets up and down from the dinner table. I don’t mind if Jonah spends the day in a pumpkin stained t-shirt. I don’t mind Libby jumping on the couch (perhaps my standards will increase when I purchase that fuschia Chesterfield I’ve always wanted). I don’t mind if either of them leaves fingerprints all over every inch of glass and stainless steel within a 1km radius. And I don’t mind if they’re loud… anywhere and everywhere.

And in those moments of doubt, I can always rely on my littlies to boost my confidence just when it’s needed.

The other day at the park, Libby intervened in a heated toddler dispute.

One little girl was trying to block another from using the swing. Libby stepped in and said: “We can all share the swing and take turns. No one owns the park. The park is for everyone.”

That’s the kind of stuff that really matters… isn’t it?