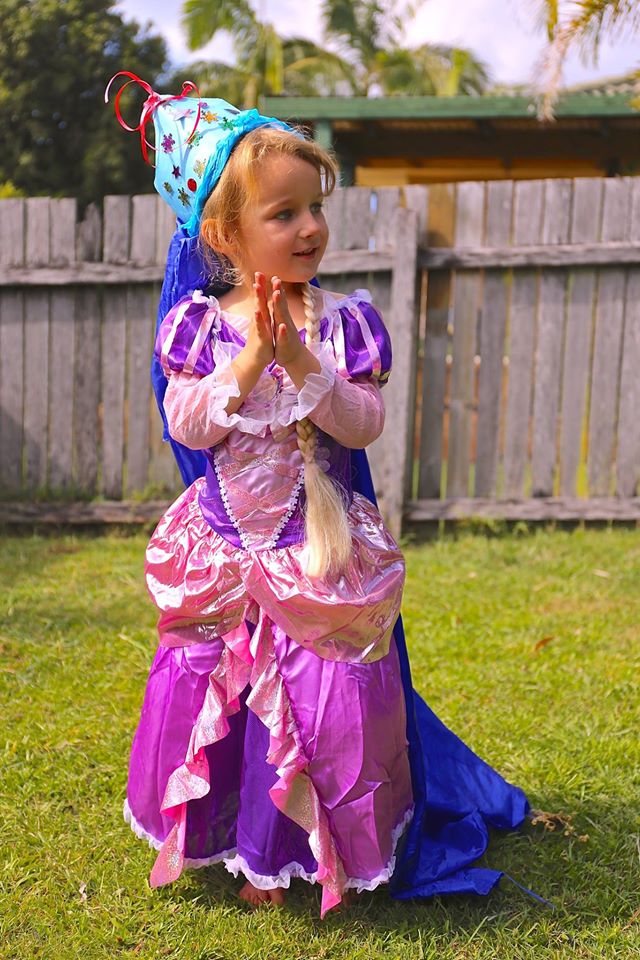 The tangled web I wove

I was at the supermarket for no more than half an hour and counted FOUR pre-schoolers in sparkly blue lamé and cheap white mesh – AKA Elsa costumes.

I promised myself then and there that I would not be buying in. If my daughter must dress as Elsa at her pre-school costume party next month, her only hope would be for someone else to do the purchasing.*

I came home and told Libby about what I’d just witnessed.

‘That’s because everyone loves Elsa,’ she said.

‘Well, do you want to dress as Elsa because you love her?’ I asked. ‘Or because that’s what everyone else is doing?’

‘Both,’ she said, blurring the lines between the right and wrong answer.

It was time for a change of tack.

I’ve been reading a lot of original fairytales lately. The kind that actually aren’t suitable for little kids because they’re full of gore and sex, but the kind that are actually the basis for modern, dumbed-down adaptations.

And it gave me an idea.

‘Guess what Lib,’ I said. ‘Before Frozen, there was this story called The Snow Queen.’

Her ears pricked up.

‘The people who made Frozen actually just copied The Snow Queen,’ I said. ‘Maybe we could look up some pictures of the original Snow Queen and copy her costume.’

It was enough to get Libby over to my iPad for some ‘research.’

But, somewhere, in the midst of fairytale get-ups, we stumbled upon a picture of Rapunzel.

‘Ooooooh, Rapunzel,’ Libby cooed. ‘I could go as Rapunzel from Tangled.’

In a moment of haste, I seized the opportunity to divert her from Elsa and pressed ‘buy now’ under the image of the Rapunzel costume.

Then, I slapped myself in the forehead. Again and again.

What sort of anti-princess mum was I to simply switch one dodgy Disney costume for another?

The dress arrived in the mail in all its sparkly, polyester glory.

Libby tried it on. She looked cute. Gorgeous.

Then, out of the blue, Libby told me that while she loved the Rapunzel costume, she didn’t want to wear it to her pre-school party.

I’d taken her to see The Boxtrolls last week. It was her first movie at the cinema. She surprised me with her carefully considered answer.

‘They were friendly,’ she said. ‘And it would be easy to make a boxtroll costume. All you need is a box and some face paint.’

*Note to Libby’s grandparents, aunts and uncles – don’t take this as an invitation to buy her an Elsa costume please!?

4 responses to “The tangled web I wove”