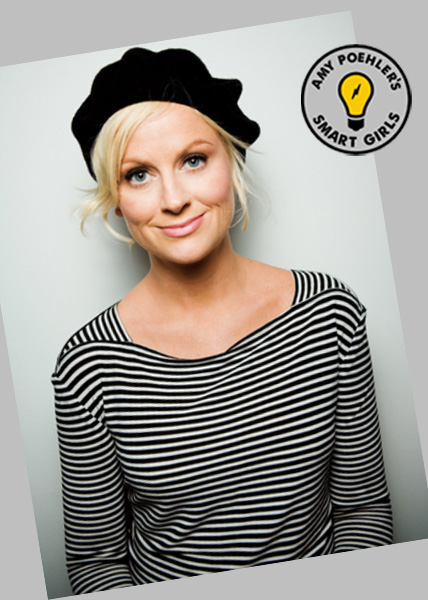 Have I mentioned how much I love Amy Poehler?

If you’re Australian, like me, you’ll probably know her as one of the stars of the sitcom Parks and Recreation, or as the co-host of last year’s Golden Globes.

Or, you might not know her at all. She’s not one those celebs who appears on the covers of trash mags at the supermarket checkout.

Check out her web series Smart Girls at the Party. It’s a talk show that features mostly teenage girls who are interviewed about their passions and talents.

It’s actually really successful, despite the fact no one on it (other than Poehler) is what you’d call ‘famous.’

What I find most appealing about the series is summed up in this quote from Poehler that appeared in the New York Times: “We wanted to do this celebration of the un-famous, and celebrate how everybody is interesting when they are interested in something.

“Sometimes this thing happens, where people think caring about something is lame. So we wanted to not be afraid of any earnestness.”

As someone who works in the media, I’ve often heard other journos or presenters dismiss potential subjects or guests as being too ‘earnest’.  And I’ve never understood it.

When did we become so jaded that earnestness was considered a negative trait?

The best people I know are the ones who have passion and aren’t afraid to shout it from the rooftops. They’re the ones who don’t care about being considered dorky. And they’re usually the most successful and happy of all.

We need more earnest people in the world.

2. showing depth and sincerity of feeling