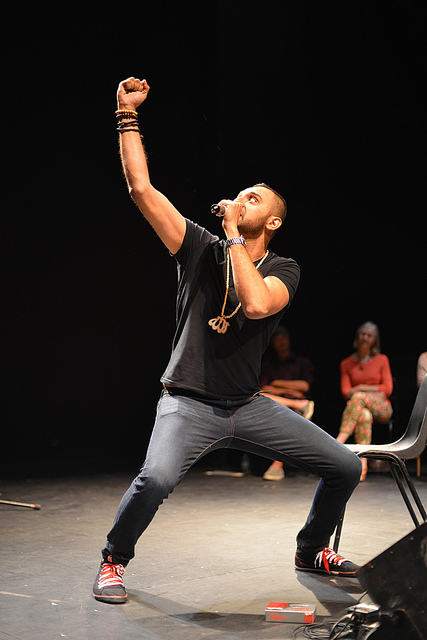 I’ve always been pretty good at keeping my hopes down.

So, I should’ve known better on Friday night.

It was the NSW Finals of the Australian Poetry Slam.

I’d won the Byron Bay heat, but that wasn’t enough to convince myself I deserved to be there.

I mean, it’s busy with touros but the Bay is essentially just a small town. The pool of poetic talent wouldn’t have been as deep as somewhere like Sydney – right?

And it was my first ever attempt at slamming. That suggests fluke – right? The winner should’ve been a seasoned pro who’d spent years honing their craft – right?

And my poem was about Disney princesses. Disney. Freakin’. Princesses. How frivolous is that? In the lead-up to the slam, I randomly came across an awe-inspiring blogger (Eden Riley) who had also made it to the finals. She had been writing a lot about how much she wanted to win and that the subject of her poems was the suicide of her brother.

That’s some deep, heavy stuff. My poem was about Disney princesses. Disney. Freakin’. Princesses. I mean… really? I should’ve just given up on the idea and saved the $300 airfare.

I got a bunch of nine-point-somethings from the judges in the audience. There was also a lonesome 7.5 met with boos and hisses. But it didn’t worry me because the rules are that the lowest and highest scores are scrapped and the middle three totalled.

It was early but I was leading.

Then, the poet after me blew my mind. Her name was Yasmine Lewis. I can’t wait to share the video of her poem with everyone. It was clever and earnest and beautiful. I think she was my favourite overall.

Yet. She didn’t score as highly as me. The hope started to float.

A young guy, also called Sam, came up a few poets later and edged in front. But that was OK – the top two poets got through to nationals.

I sat on my barstool nervously tapping my foot, daring myself to think I could make it. Daring my hopes to float and float some more.

Fifteen poets in and I was still placed second.

I let it happen. The hopes got up.

I started to picture myself performing at the Opera House. Heck, I even pictured winning the big one. Overseas trips. Another book deal.

But as the time ticked on, the crowd’s enthusiasm seemed to grow and grow.

The last couple of poets got high nines. The final poet, who strangely and hilariously used his two minutes to mock the entire slam poetry scene, even got a 10.

And, I hate to admit it, but I was crushed. I’d let my family down. I’d let my town down.

Most of all, I’d let myself down. And it would never have happened if I didn’t let that hope get up.

I spent the next 12 hours deflated. Re-playing my performance in my head. Wondering what I could’ve done better. Cursing my early placement on the draw.

I stopped replaying my own performance and began replaying the others. They were amazing. They were truly inspiring. It was fierce competition. SO fierce. I felt privileged to have been amongst it.

I went to the national finals as a spectator on Sunday night. Some of the performances were so damn powerful.

My two favourite poets came third and fourth, proving how subjective this art can be.

Getting my hopes up for next year.

And realising that that was a good thing.