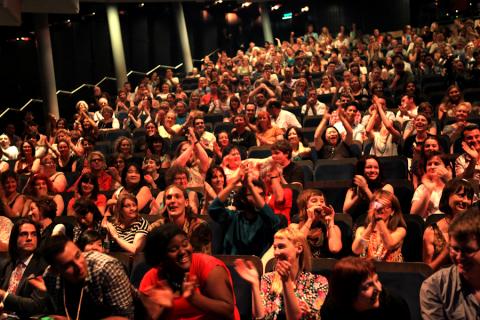 So, those were my first words at this year’s NSW finals of the Australian Poetry Slam.

They have some context, which I’ll explain another day (probably when/if I post a video of the performance).

It was my second time in the NSW finals, but a very different experience to the first.

Last year, I was uber confident. Quietly so. I remember flying to Sydney just staring at the seat in front of me, couldn’t even read the craptastic advertorial airline mag, completely in competition zone, playing my poem on repeat inside my mind.

I got a spray-tan. How freakin’ RIDONKULOUS is that? So important for spoken word artists to have a healthy glow… or something.

I didn’t win, and I felt deflated for a good week afterwards. BUT, the competition was hot… I’m not sure if that made it easier to deal with or not.

This year, I had nothing to prove. And no fire in the gut.

I wouldn’t have even entered if it wasn’t for my husband wanting to. We both went in a local heat and made it through to Sydney together.

I wasn’t happy with my poem and wrote another the week before.

It was about domestic violence, but I was a little worried it was a bit too ‘topic of the moment’ with all the government announcements in the news of late, the White Ribbon stuff, the awe-inspiring Rosie Batty...

I did a workshop with superstar spoken word artist Buddy Wakefield a while back and his main tip was not to write about anything that isn’t a lived experience of your own… no preaching… no commentary on subjects that don’t directly affect you.

I don’t know if that’s right, but I tried to weave in some personal anecdotes. I’m no battered wife, but I had a boyfriend once who ended up going to jail for abusing his next partner. Dodged a…

But as I stepped on stage in my pasty-skinned glory, I just didn’t feel it.

As I watched poet after poet take their place, all flailing arms and heaving chests, I wondered if I needed to take a drama class.

I felt like I was at an audition for NIDA and out. of. my. depth.

I went to the national finals two days later and got to enjoy it purely as a spectator. Taking in the words. Listening, properly.

But my three favourites didn’t make the top five.

It reignited my passion for this beautiful thing called spoken word.

And it reinforced there’s no right way to do it. A piece that tugs at the chest of one person can have the next screwing up their nose.

I think the moment we get all ‘shoulda, coulda, woulda,’ too competitive, too judgmental… that’s when slam poetry loses its appeal.

Maybe it shouldn’t even be a contest… although a slam is a damn clever way to fool masses of people into attending what’s essentially one big poetry reading.