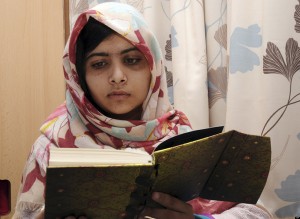 Embargoed to 0001 Friday November 9.
Undated photo released by Queen Elizabeth Hospital in Birmingham, showing Malala Yousafzai, the 15-year old girl who was shot at close range in the head by a Taliban gunman in Pakistan, as she continues her recovery in hospital Friday Nov. 9, 2012. Her father Ziauddin Yousafzai spoke on behalf of Malala Yousafzai, thanking people from around the world for their inspiring and humbling support, speaking exactly a month after she was targeted as she traveled home with classmates on a school bus. Malala was flown to Britain for specialist treatment at Birmingham’s Queen Elizabeth Hospital after escaping death by inches when a bullet “grazed” her brain on October 9. (AP Photo / Queen Elizabeth Hospital) no sales