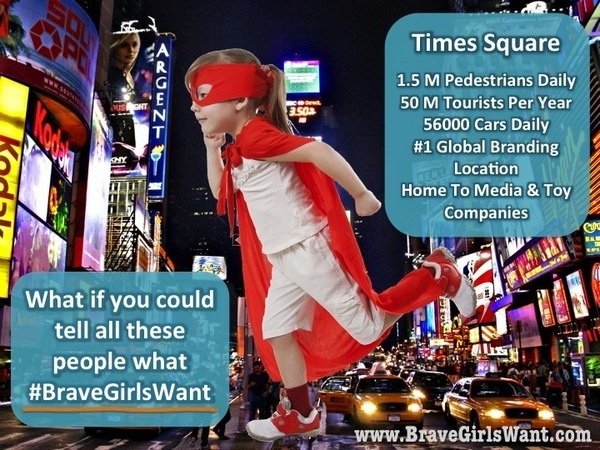 You may recall a post of mine a few months back about a crowd-funding campaign being run by the Brave Girls Alliance.

The alliance was sourcing donations so it could rent a billboard in Times Square to display a load of tweets with the hashtag BraveGirlsWant.

The good news is, they raised the $25,000 they needed to rent the billboard over seven days.

Like most crowd-funding campaigns, if you donated a substantial sum there were rewards.

I was one of the donors, and my reward was to have eight tweets displayed on the billboard – how cool is that?!

If you’re in Times Square between October 11 and 17, you can see the billboard in person. If not, here’s what I submitted:

3) #BraveGirlsWant to enjoy their childhood. Stop rushing them. They will be adults soon enough. @sammyturnbull

4) #BraveGirlsWant choices – beyond pink, beyond princesses, beyond make-up, beyond fashion, beyond fairies @sammyturnbull

6) #BraveGirlsWant to celebrate what their bodies can do – run, swim, climb, dance – not how they look @sammyturnbull

7) #BraveGirlsWant parents who don’t give in to the pink, princessy marketing machine – help your daughters be unique! @sammyturnbull