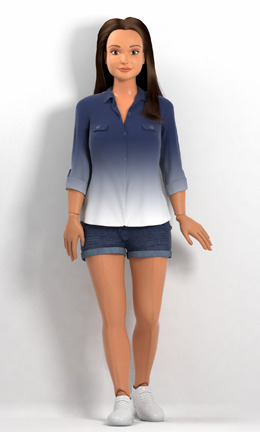 Well, not quite, but I did contribute to Nickolay Lamm’s crowd-funding campaign to help bring Lammily into production. Twenty-five dollars will also get me my own Lammily in the post.

That’s great, but what’s a Lammily, you ask?

It’s a doll made according to the typical proportions of an average 19-year-old woman. Not a totally-out-of-proportion-unrealistic-standard-of-beauty-type-doll, AKA Barbie.

I’ve always had a problem with Barbie. Sure, I grew up with a bunch and played with them a lot. But I always felt more connected to my Skipper doll – Barbie’s younger sister with flat feet and a smaller chest.

A couple of Barbies have also infiltrated my daughter Libby’s toy box. I don’t ban them based on the forbidden fruit theory that anything prohibited will immediately become more desirable. I do, however, tell her that they’re not my favourite toy.

I tell her Barbie doesn’t look real. That real-life girls and women don’t look like Barbie.

I love that Lammily looks natural, fit and strong. Sure, not every ‘real’ woman looks like that, but at least she’s in proportion.

I also tell Libby that I find Barbie a bit boring. She doesn’t do much. I guess those tiptoes and permanently bent elbows make it difficult.

Lammily, on the other hand, has articulated wrists, elbows, knees and feet.

I really hope Lamm’s campaign gets up.

As he says on his webpage:

Rather than waiting for toy companies to change their designs, let’s change them ourselves by creating a fashion doll that promotes realistic beauty standards.

You can contribute to bringing Lammily to life here.