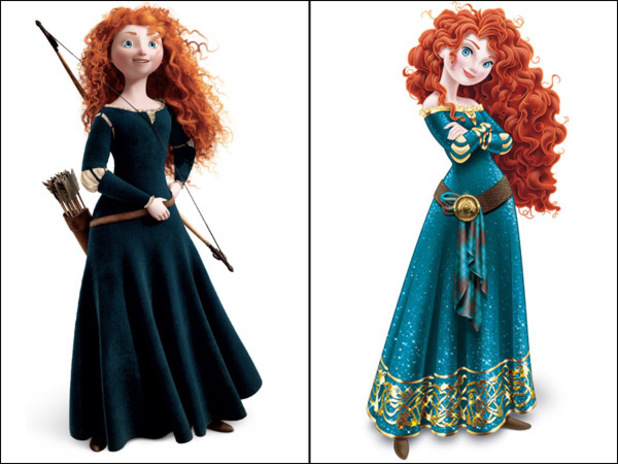 Here’s a bad parenting confession: I couldn’t wait for Lib to watch television.

I know, I know. ‘Screen time’ is evil. I’ve read the books. Save your judgey judge pants comments for another day.

Fortunately, or unfortunately, my girl doesn’t have a long attention span.

I know parents who take their three-year-olds to the cinema and whose kids will happily sit in front of a DVD while the adults wine and dine.

So, it was probably a waste of time to rent Brave on DVD.

Lib lasted about 15 minutes before she got bored and went to her room to play.

But I was intrigued. Brave is widely praised as the first Disney/Pixar film to feature a proper female hero – Merida. I wanted to give it a chance.

Yes, Merida is a princess, but she’s no Sleeping Beauty. Merida likes archery, trekking through the woods and has no interest in finding a husband.

There’s something else about Merida that caught my attention. She is a wild-haired and fresh-faced teenager. Nothing like the busty, tiny-waisted, long-lashed, doe-eyed glamazons that make up the rest of the Disney princess franchise. Suitably impressed as the credits rolled, I Googled Brave to find out more.

Can’t say I was too shocked to find this: It’s the original Merida alongside a ‘made over’ version created for merchandising.

My disappointment turned to hope when I discovered a petition had been launched to preserve the original Merida.

At the time of writing this post, the petition had collected more than 200,000 signatures. Wow.

Disney has reportedly taken the glamorised Merida off its website, but continues to use her in its merchandising.