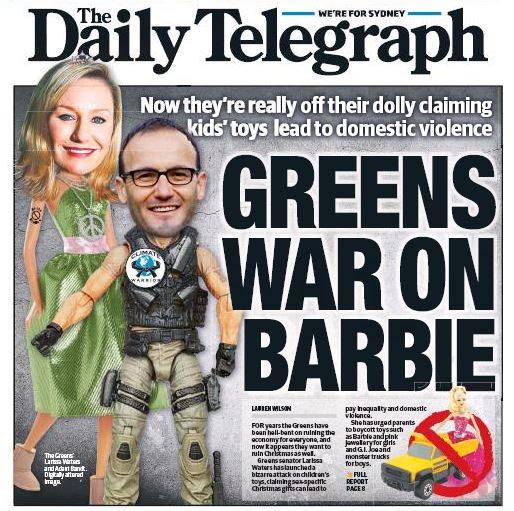 It was the perfect front-page story in the lead-up to toy consumerism on steroids – also known as Christmas.

Conservative commentators and even our prime minister pleaded for us all to just ‘let boys be boys’ and ‘girls be girls.’

It was a sensational flurry of misinformation that completely distorted the message of the original No Gender December creators.

Here are some facts:

– No Gender December is an initiative of an organisation called Play Unlimited with the motto ‘every toy for every body.’ It’s not some hairbrained idea concocted by a politician’s media advisor for some holiday headlines.

– The campaign is supported by many leading educators, psychologists, sociologists and everyday parents worldwide. Larissa Waters was but one of many who took the pledge to support No Gender December.

– No one, including Senator Waters, ever said Barbie was to blame for domestic violence. The World Health Organisation, however, says when gender inequities exist in a society, there is more gender violence in that society. For more information visit Our Watch – an organisation supported by the Australian Government that aims to end violence against women and their children, and an organisation that supports the view that gender stereotyping and inequality leads to more serious issues such as domestic violence.

– No Gender December does not call on parents to raise genderless children. There has never been any suggestion that kids need to wear potato sacks, be christened ‘X’ and live like androgynous amoebae.

– No Gender December simply calls for toy manufacturers and retailers to stop marketing their products as ‘for boys’ or ‘for girls.’

There is no denying that most major toy retailers and many manufacturers in Australia participate in gendered marketing.

And, while children are free to venture into which ever toy aisle they choose, the messages sent to them, however subtle, will infiltrate their sponge-like minds.

If not in the toy aisle, in the junk mail, on the television, in the packaging of their gifts, from the mouths of their friends who have also been subjected to the stereotyping.

My mostly independent-thinking four-year-old daughter loves dinosaurs and, despite living in a household with fiercely progressive parents, recently decided to pass them onto her brother because they are ‘boys’ toys.’

Campaigns like No Gender December bring us out of our slumber and make us consider how seemingly insignificant issues may evolve and end up contributing to widespread crises.