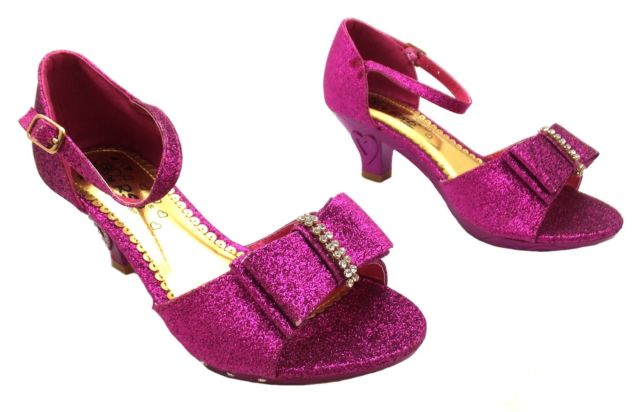 She toddled out to the lounge room looking like some sort of bejewelled, Dame Edna-ish dwarf.

Her neck was adorned with strings of shiny plastic beads. Silver chandeliers were clipped to her ears. A gawdy tiara sat askew on her head. And the clip clop sound on the tiles came from the oversized high heels on her pudgy feet.

Who was this two-year-old? Certainly not what I ever imagined my daughter to look like. But it was her.

When Libby turned two she was given eight pairs of plastic high-heeled shoes.

She was given one pair for Christmas the year before. I kid you not.

We accepted the gifts with grace and I let her try them on.

Her dad in particular was dead against the idea. He wanted to bin the sparkly lot immediately.

I reasoned with him that the minute we completely outlawed anything would be the minute it became more desirable to our children.

So, out she came in her ridiculous get-up and I stifled a giggle.

Then, it happened. She took a step and twisted a foot awkwardly. Her tiny body fell faster than we could catch her and she went sliding across the floor.

As Libby wailed, I de-frou-froued her and wiped her tear-stained cheeks.

The shoes were ‘donated’ and she hasn’t asked for them back.

A few weeks ago I pulled on my own platform heels for a night out with some girlfriends.

“Silly shoes,” Libby said, much to the delight of her dad.

The trouble is, I know they’re silly. I struggle to walk in them and if I wear them for longer than a few hours I pay for it the entire next day.

Maybe one day I’ll grow into a figuratively bigger person, confident enough to accept my short stature in all its flat-footed glory.

Actress Emma Thompson caused a fuss this week when she accepted a Golden Globe with heels in hand. She then attended the SAG Awards in flats and made this comment:

“I’ve taken my heels off as a feminist statement really, because why do we wear them? They’re so painful. And pointless, really. You know, I really would like to urge everyone to stop it. Just stop it. Don’t wear them anymore. You just can’t walk in them, and I’m so comfortable now.”

I admire her. I really do. But, you know, she’s kind of tall anyway. Sigh.