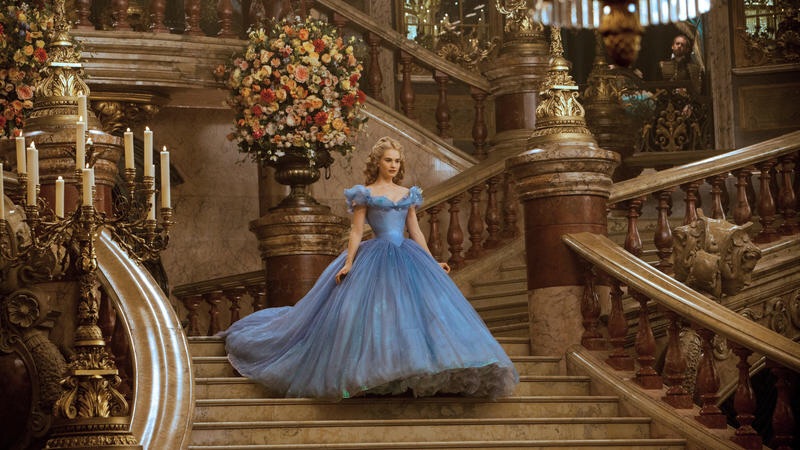 Sit down. What I’m about to say may shock you.

I liked the new Cinderella movie.

It was no 180 degree rewrite of the 1950 animation. No Brave, or Frozen or Maleficent, when it comes to strong, modern girls.

But it was tweaked – subtly.

The best part of the adaptation was that Cinderella (Lily James) herself had some depth as a character.

She fit the undeniably classic and narrow mold of fairytale beauty with her fair skin, hair and absurdly small waist (Lily told one journalist that she couldn’t eat solid food while wearing the corseted costumes during filming). But, as the prince tells the king: “she was a pretty girl, but there was so much more to her…”

When Cinderella’s mother died her parting words were ‘have courage and be kind.’ Cinderella abides by that motto for the rest of her life, but arguably to her detriment when she becomes quite the doormat to her evil stepmother and stepsisters (whose ‘ugliness’ is much more of an internal trait in this live action version of the story).

Yet Cinderella is not completely spineless.

She is stoic, musical, multilingual, and determined to carry on her parents’ legacy (even if that involves not much more than taking care of their old house).

In a moment of anger, she rides through the forest on her horse leading to a chance encounter with the prince – something that doesn’t occur in the original film.

The brief scene is important because the pair’s attraction begins minus the ballgown, make-up and glittering hair. They even have a conversation – GASP!

When the prince announces he is hosting a ball, Cinderella asks the key question of her stepsisters: “Wouldn’t you like to know a bit about him before you marry him?”

The sentiment is echoed by the king when he tells the prince: “You must not marry for advantage, you must marry for love.”

They’re all small additions to the original screenplay to give it that much-needed contemporary twist.

Despite the fine-tuning, however, in the end Cinderella does need to be ‘rescued.’ Though there may be comfort in knowing her happily-ever-after comes from true love (the palace and riches are just a bonus).

Overall, the film was a lavishly lovely production that I’d give 3.5 stars. Cate Blanchett and Helena Bonham Carter give awesome performances.

So, will I take my four-year-old daughter to see it?

It’s certainly family-friendly, not daring to deviate from its wholesome G-rating.

But I’m going to leave it to her. The school holidays are on our doorstep which means a minor onslaught of children’s movies – the Sponge Bob movie, Shaun the Sheep and Home are all on our local cinema timetable.

And that’s what it’s all about – choice – not assuming your kid is going to like something because of the way it’s marketed.

Plus, I know only too well how many Cinderella costumes, tiaras, drink bottles, backpacks, pencil cases and every-other-product-you-can-think-of are about to be unleashed onto our shelves and screens… at least The Anti-Princess Club is there alongside some of it though, right?

(A new lot of Cinderella books were directly below my books in this pic but I cropped them out – they don’t need any more PR help!) Anti-Princess Club books on the shelf.