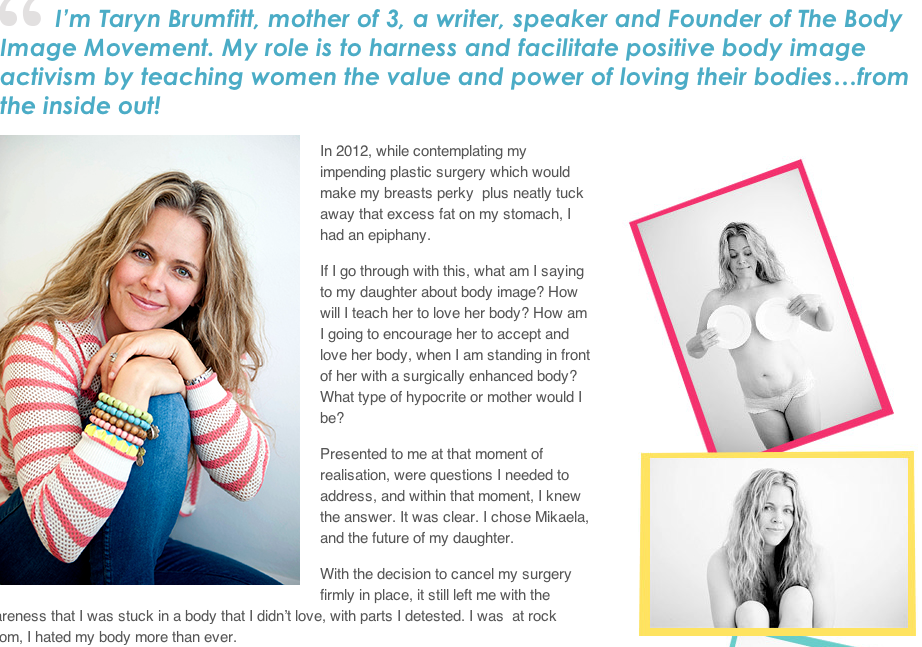 Apparently I’ve been hiding under a rock, because I’ve only just discovered Taryn Brumfitt and The Body Image Movement.

Taryn is a mum-of-three who had an epiphany when she was on the brink of plastic surgery to ‘fix’ her post-baby tummy and breasts.

She suddenly realised that by undergoing surgical ‘enhancement’ she would become somewhat of a hypocrite if she wanted her daughter to love her body.

So, Taryn decided against going under the knife and instead chose to live happily with her body the way it is.

I nodded incessantly as I flicked through Taryn’s blog.

I, and I’m guessing millions of others, could identify with so much she had to say about learning to love your body for not just the sake of yourself but for your children.

Not long after giving birth for the second time, I wrote about finding a new respect for my body and all it could do.

Then, back in October I wrote one of my most popular posts: My Excuses for Not Looking Like Maria Kang. I noticed in November that Taryn also wrote a post called Dear Maria Kang… this is my excuse! (See, we’re on the same wave length).

Now that Jonah has turned one and life is becoming a little more structured, I have managed to start prioritising exercise and healthy eating and I’m feeling even better.

I’m  actually at one of the healthiest stages I’ve ever been, yet I still have that smiling post-bub tum and other features you’d never find on a bikini-clad celebrity mum pictured in a magazine under the headline ‘how I got my body back.’

Sometimes, I get a little mopey as I wonder if I’ll ever ‘get my body back.’ (Who says we’re ever supposed to by the way?) But seeing people like Taryn makes me realise it doesn’t matter. Health is what matters.

As Taryn says: “Health is physical, emotional and spiritual and so much more that is not visible and not always obvious to others.”

So, I’ll continue focusing on my health. Physical changes may or may not be welcome side effects.

I don’t know that I’ll ever post nude photos of myself online like Taryn has done, but if my body serves me well enough to keep up with my kids in running races for the next decade I’ll be happy.